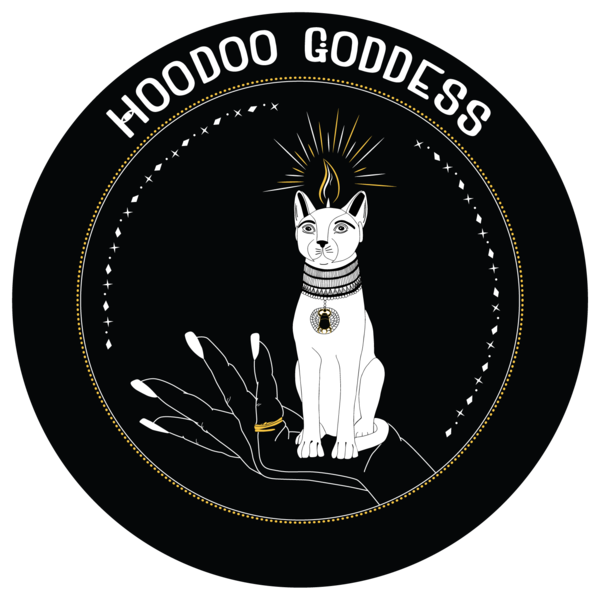 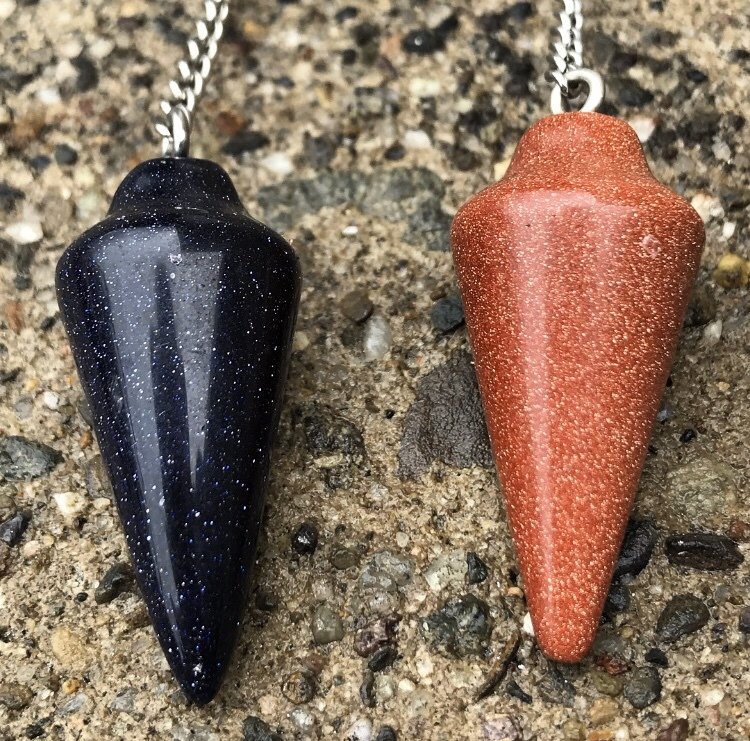 What is a pendulum?

A pendulum is a divination tool that provides answers to questions from the subconscious within your intuitive self. Pendulum includes a handout on how to use your divination tool, a sachet for carrying and protecting the pendulum.

Processing takes 1-3 days for Pendulum only.

What is Gold Stone used for?

Often mistaken as a mineral, goldstone is actually a glittering man made glass. It is typically reddish brown with coppery flecks but also comes in green, blue, and purple, with more silvery specks. The other varieties are named after it, like green goldstone, blue goldstone, etc. Goldstone was known historically as aventurine glass, from its Italian name avventurina, “accidental”, from the rootavventura meaning “by luck, chance, or risk”. The name may refer to the random nature of its spangles or the difficulty in producing it.

In gem folklore, it was first produced accidentally. The legend has many variations. A monk, or factory worker, randomly knocked copper shavings into molten glass, alchemists discovered it during their attempts to produce gold, or monks practicing alchemy created the secret recipe. This explains its trade names: monk's stone, monkgold, gold flux, and even goldstone itself. Sometimes it is falsely represented as a natural material secretly mined by monks or still hand crafted by them.

The hidden virtues of a mineral are revealed in its geology, cultural associations, and effect on the chakra system:

Glass: Because it is reflective and forms a transparent barrier, glass represents spiritual protection. Traditional uses from Egyptian amulets to Greek evil eye beads draw on this symbolism. While goldstone is specifically associated with alchemy in gem lore, all glass supports personal transformation. Natural glass like obsidian, tektites, and fulgurites are the product of heavenly or underworld fire. Man made glass was once as magical. Because it allows light to pass through it, glass signifies the flow of spiritual energy between the physical and spiritual realms.

2. Good Fortune: Because of its etymology from the Italian avventura, “by luck, chance, risk”, aventurine glass is associated with abundance, good luck, and games of chance. It can also be translated as “by fortune”, so it is associated with reading future trends, like divination.

3. Adventure: Adventure, venture, and aventurine glass all come from the same Latin word, adventura, “a thing about to happen”. The words are so close, many people mispronounce it as “adventurine” glass. Many of goldstone's contemporary meanings come from this word play. It is recommended for ambition, confidence, and evaluating risk. Also safe travel, trip planning,and enjoying life.

4. Copper: There are ancient associations between copper, the planet Venus, and love goddesses across cultures, from the Egyptian Hathor to Greek Aphrodite. Each of the spangles in goldstone is a microscopic copper crystal that formed as the glass cooled. Goldstone shares the metal's metaphysical properties: attracting abundance, harmonizing relationships, and creativity. Because copper is a good conductor of electricity, it is a popular tool to direct spiritual energy. Goldstone can be used for energy work, physical vitality, and to charge other minerals.

4. Gold: Although it is produced from copper, its golden color and trade names associate it with gold. Gold is the metal of the Sun and goldstone may also be known as sunstone. Like copper, the metaphysical properties of gold are abundance, energy, and creativity. [www.whateverworkswellness.com]

Save this product for later

Hoodoo Goddess made me a green female candle & money oil for drawing in new money and overall success with my new career. My candle burned completely and left behind a free flowing wax remains. I went to the casino, used the money that I put the money oil on and won over $1k! I went the next day and put more money oil on my money and won over $1k again! I appreciate her work and candles! 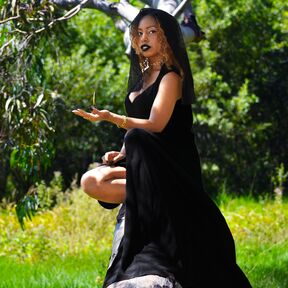 Descendant hoodoo woman by the name of Paris A'jana is an artist born under the Pisces Sun. This beautiful soul who crafts spiritual candles is Better known as the Hoodoo Goddess...

From birth, she was raised along the northwest of the Pacific Ocean by her mystic father. He who is heavily embedded with Louisiana roots practiced Hoodoo & Voodoo with a huge influence of sacred teachings from Native American traditions. By nature, her grandmother actively invited magic into their daily life with the guidance of her ancestral spirits to nurture and develop the young Goddess.

As a child, she can vividly recall peeking along the side of the kitchen wall or tip-toeing over the kitchen counter to see what magic her father was conjuring up during the witches hour. The curiosity only grew within herself as it was in her bloodline and her passion bloomed. At the tender age of 8, Paris A'jana melted a variety of colorful pieces of wax on a white pillar candle. She was able to create her first hoodoo candle alongside her encouraging father.

From there the family traditions were passed down in the art of magic, healing, and herbs. Paris A'jana has grown spiritually through the years and has mastered the art of making hoodoo candles, mixing potions and is able to utilize a variety of divinatory tools. She incorporates numerology, tarot, and oracle card readings when called upon. Energy healing radiates from her hands for those in need of emotional, physical and/or spiritual healing...

With a childhood filled with wonderful memories of true magic, rituals, blessings and divination readings Paris A'jana is able to share her knowledge and vision with the world while nurturing her own little goddess.

Hoodoo Goddess Headquarters is based out of Newport Beach, California and Seattle, Washington.